About The Pink Tie Society Foundation 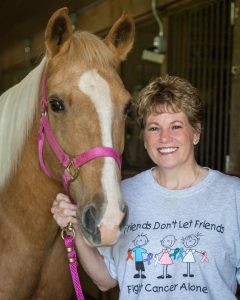 When my wife, Drema, was first diagnosed with breast cancer she decided not to tell anyone about it until she knew exactly what she was up against. I discreetly talked to a female friend of mine who had recently gone through breast cancer and asked her, as a husband, what should I do? She told me to do anything and everything, regardless of how silly it may seem, to show my support.

The next Sunday, while getting ready to go to church, I noticed a pink tie hanging in the back corner of my closet. I honestly don’t remember where it came from or how long it had been there, but I took it out and wore it to church. Drema and I were the only two people there that knew why I was wearing it. As simple a gesture as it was, it seemed to lighten the situation.

Monday, when I went to work, I called a friend, Mike Warwick with Rooklins (a men’s clothing store in Covington, Virginia) and told him to order me six more pink ties. I didn’t care what they looked like, just get them. With seven pink ties I had plenty to choose from and work with.

Being a local elected official I serve with several other men. I asked them if they would wear some of my pink ties to our bi-monthly meetings if I loaned them one, to which they all gladly said yes. Even though Drema never attended any of the meetings, she knew what we were up to. I publicly stated that I would wear pink ties, where they were appropriate, until my wife was considered cancer free.

During a six month period, no man I asked to wear a tie turned me down. One man even told me he had never wore a tie in his life, but he would wear this one.

As Drema was finishing her chemotherapy, we met a retired college professor whose daughter had just been diagnosed with breast cancer. He said it meant a great deal to him to see someone who had undergone breast cancer treatment and was doing so well. He knew about my commitment to wearing pink ties and, somewhat jokingly, asked if I would loan him one of my “lucky pink ties”. I had two of my ties cleaned and sent them to him. I learned something that day:  If a man gets scared enough, he will try anything, including luck.

Being a logger I live in a “man’s” world. A friend who knows this and heard about my commitment to wearing the pink ties, commented that I should be careful about it, warning that it could become embarrassing. My response to him? “The only thing more embarrassing than wearing pink ties is to have your ass whipped by a guy and a few of his friends that will wear pink ties to show their support for someone else”.

As word spread in our small community about Drema’s cancer, our friends, neighbors and even acquaintances offered their own stories of people they knew who have had or were currently fighting the same battle. I couldn’t wait to get home to tell her the positive stories, the one’s that inspired hope. However, not all the stories were encouraging. I never once told her any of the bad stories…..and I never will. For that reason this website contains a rolling block of the positive stories we receive. The intention is to give people somewhere to obtain a daily dose of hope. From average people, dealing with extra ordinary circumstances, who have been there and know how important those rays of hope are. These stories are in their own words, unedited or un embellished, because everyone has their own story to tell.

The day Drema called me from the parking lot of the doctor's office, she told me "This is going to be an inconvenience; I want to get this over with. I've got things to do." I dedicate this foundation to Drema's positive attitude, the people we met along the way and the things I've learned on this journey with her.

Thanks for your support
- Steve Bennett

Want To Purchase a Tie to Help out a great cause

Then click the button to head to the store.